The Texas legislature is bicameral, composed of two houses, the Senate and the House of Representatives. 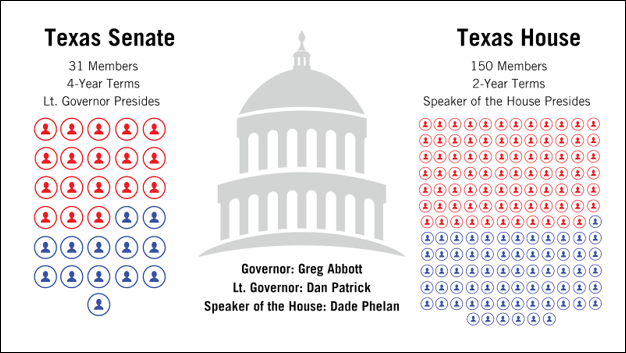 To find your representatives in these houses, visit https://wrm.capitol.texas.gov/home.

The breakdown of Republicans (red) and Democrats (blue) in this infographic represents the 87th Texas Legislature (2021).

The legislature is responsible for proposing and considering bills and resolutions, considering proposed amendments to the state constitution to pass to a vote by citizens, and appropriating government funds. Bills must pass through both the House and the Senate before they are passed onto the governor to sign.

The governor has the power to veto a bill; in the case of appropriations, the governor can also use a line-item veto to veto individual items in a bill. The governor has 10 days following the passing of a bill to veto it, or the bill becomes a law without his or her signature. This period extends to 20 days after the session adjourns if the bill is introduced with fewer than 10 days remaining in the session. To override a veto, a two-thirds vote in both the House and the Senate is required. However, if the governor vetoes legislation after the legislative session has adjourned, the veto cannot be overridden.

The Texas legislature is unique because it is a part-time legislature. Both the Senate and the House only meet for 140 days every other year. This period falls from January to May of odd-numbered years. The governor can also call short, special sessions of the legislature to address specific issues in an agenda that the executive sets. During special sessions, the legislature may only pass laws related to the reason the session was called.

With its responsibility to pass the budget and its ability to pass bills affecting the arts organizations and artists, the legislature has a major impact on the arts across Texas. To understand more about how the legislature impacts the arts in Texas, explore the below resources that take you through some of the important legislative structures and processes to which arts advocates should pay attention.